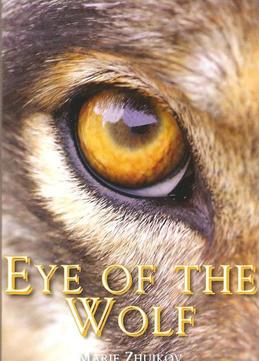 If you're looking for a book to take you away this summer, consider giving this one a try. "Eye of the Wolf," while technically a paranormal romance (there is romance, and there are werewolves), is far from what we've come to expect from the genre. A lot of things make this book different -- the vivid, lush descriptions of Isle Royale in the 1980s; the believable and nuanced cast of characters; the somewhat claustrophobic feel of being isolated on the island for a summer. But what really makes this story different is the wolves.

Marie Zhuikov's story puts the "wolf" back in "werewolf." Banish any images of half-lupine madmen howling at the moon, and replace them with people just like you and me who, through ancient magic, become psychically joined to the alpha pair of an Isle Royale pack desperate to save themselves at a time when the wolf population is suffering from years of inbreeding on the island. They know their only hope of survival is to reach the mainland, but to do that, they need human help. And to secure that help, they must be able to communicate with the humans. This is where the magic happens.

It's in the scenes with the wolf pack that this book really shines. Zhuikov's book is meticulously researched, and she brings us intimately into the world of the wolves, full of moose hunts, dominance struggles, pungent odors, and family loyalty. If you've ever wondered what it might be like to see the world through the eyes of these majestic and mysterious creatures, this book might get you closer than you'll ever be short of a werewolf bite.

The romance is atypical as well, with a beautiful and bittersweet ending that haunts me in the best way. Luckily, the sequel is out this summer, so you can read the last page knowing the story is not truly over yet.

Eye of the Wolf

Wolves have lived on Isle Royale for over half a century. But, because they have lived in isolation on the island national park surrounded by Lake Superior for so long, their genetic diversity has suffered. It's gotten so bad that pups are stillborn. In other words, the wolves of Isle Royale are slowly dying out.

The alpha wolves know their only salvation is to escape the island, and the only way to do this is by boat. They need the help of Drew Tamsen, a boat pilot for the island’s resort. The only way the alphas can make their wishes known is to lure him into supernatural bondage as a werewolf.

Drew’s girlfriend, Melora St. James, searches for him and tries to return him to his human state. But Melora must contend with a she-werewolf for Drew’s affections and save him from the scientists out to capture him. Melora is caught between her love for Drew and her sympathy for the wolves’ plight.

There’s nothing predictable about the story. Human nature and wolf nature, with all their individual instincts, desires, and good intentions, wrestle with one another and create a suspenseful climax. –Duluth Budgeteer Newspaper

The book delivers a lot of science-based detail and island description. If you like the genre and love the Lake, this would be a relaxing read to prick your imagination. – Lake Superior Magazine